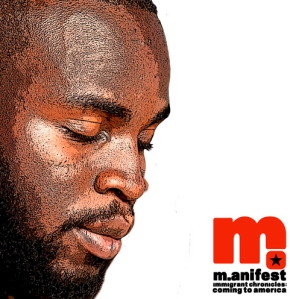 “M.anifest has the kind of assured, joyful, ruminative voice that made Mos Def into Hollywood’s favorite conscious-rap star” – City Pages

Ghanaian MC, M.anifest is set to release his sophomore album Immigrant Chronicles: Coming to America on September 20th – four years after his very well received debut manifestations that made him critics’ darling.

The four years since his debut have been far from a hiatus for M.anifest. He has been spotlighted as an artist to watch out for on MTV (2010) and on AllHipHop.com (2009). He also earned invitations to play shows in France (Puma World Cup showcase) and Spain (Festa dos Mundos) with Africa Express – performing on stage with musical titans such as Tony Allen, Damon Albarn (Gorillaz, Blur), Femi Kuti, Mick Jones (The Clash), Amadou and Miriam and many other stellar artists.

A charismatic artist that straddles two worlds, Ghana and the Twin Cities, M.anifest uses Immigrant Chronicles to tell compelling narratives in which his Ghanaian origins and adult life in America confront each other seamlessly. The first single off Immigrant Chronicles, “suffer” (produced by Budo of Rhymesayers) was featured on BBC World Service and the accompanying video shot in Ghana is currently on rotation on Channel-O. More information on the album’s features, tracklisting, and producers, will be unveiled soon.